Australian women comprise a large proportion of the informal work sector within our economy.

This informal work can typically be understood in two forms:

These jobs often reinforce low-income status for women and their families over their lifetimes, and do not offer financial or social security, nor opportunity for growth throughout their working lives. In fact, they exacerbate the vulnerability of women as they do not offer adequate protections or insurance, access to income protection, appropriate occupational health and safety, maternity benefits or parental and care leave.

Statistics released by the Workplace Gender Equality Agency (WGEA) in August this year indicate that the workforce participation rate among Australians aged 15-64 is 73.1% for women, compared to 82% of men. Further, women constitute only 37.6% of all full-time employees in Australia, yet they are 67.9% of all part-time employees. These statistics are highly gendered and have only been further exacerbated by the ongoing impacts of the Covid-19 pandemic on our economic climate.

So what does this idea of the informal work sector occupied by women really mean? In addition to the above statistics, women comprise 52.6% of casual employees in Australia. The Independent Inquiry into Insecure Work in 2012 outlined a set of indicators for this informal, vulnerable sector, including: 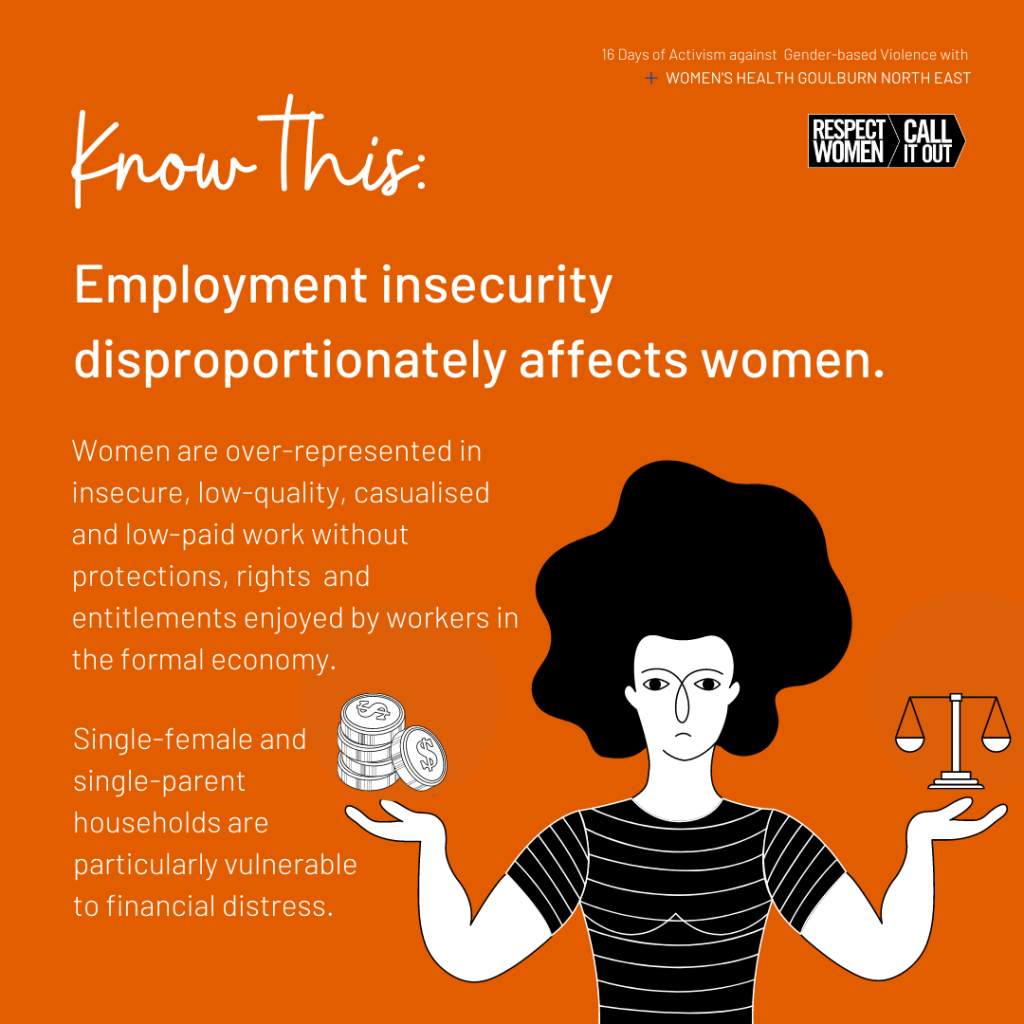 Our casual workforce offers women the flexibility they often need to fit in domestic and unpaid care work for their families, however with this flexibility comes financial insecurity and limited longevity and progression in the workforce. Employers’ limited accommodation of unpaid and domestic care responsibilities for women also serves to hinder women’s abilities to gain standard full-time employment, and current legislative frameworks enable employers to easily deny permanency in contracts and roles.

These structural factors leave women vulnerable to discrimination in employment, to unfair dismissal and unequal treatment in the workplace.

It also places them at a higher health risk as they feel pressure to not skip shifts or take sick leave and continue to work in unsafe environments. We have seen this year the impact of Covid-19 on the privatised aged care sector in Victoria, where many women work for some of the lowest wages, with an award of just $23 per hour. The virus outbreak earlier this year in aged care cost many Australian families thousands in lost wages, which in turn forced many on low-income to live below the poverty line with no government or income protections.

This workforce is also underpinned by a reliance on migrant women who are forced into casual or part-time work, representing intersectional disadvantage for these Australian populations.

Female-dominated work sectors typically attract lower wages due to the historical undervaluing of care-based occupations. Industries such as healthcare and social services that are predominantly comprised of female employees have much lower pay awards than male–dominated industries such as construction. These male–dominated industries also have higher incidents of discretionary payments like bonuses and commissions, while there is little to no access to these in female–dominated sector. All these factors listed thus far also serve to drastically impact the capacity of women to earn superannuation over their lifetimes, leaving them vulnerable to living in poverty in their retirement. A Per Capita Australia report from 2017 found that women’s superannuation balances upon entry into retirement are 47% less than men’s.

But it doesn’t all have to be doom, gloom and inequality. As we begin to understand how the pandemic has influenced Australian women and their financial security, there is no better time to start discussion on how we can address some of these issues and move towards a more equitable workforce. Australian Unions “Change the Rules” framework offers some hope in this area and suggests five key areas for improvement to help achieve women’s job and economic security moving forward. They outline their role in this to advocate for working women through unions and provide a holistic framework for better understanding of this interrelated economic and social issue. They put forward the need for:

Discussion of these strategies outlined by Australian Unions offer some hope for the future of women in the vulnerable, informal sector of Australia’s economy. Countries like Sweden, with a proudly declared feminist government, provide a more egalitarian climate for us to see progress in this area. Sweden now has more women in management positions than men in its workforce, however despite this, the country still struggles to balance public and private sector equality, with women tending to end up in the public sector which continues to sustain the gender pay gap.

Discrimination in the workplace however has been illegal in Sweden since 1980, and the Swedish government recently expanded laws to include prevention of discrimination and harassment. Sweden’s family care focus extends throughout its guaranteed free childcare system and its parental leave scheme. Parents are entitled to 480 days of paid parental leave when they have a child, which is 240 days each – but within this, each parent (regardless of gender) has 90 of those days reserved for themselves alone, which cannot be transferred to the other parent, even if they decide to be the dominant carer.

This is fascinating, as it not only ensures financial and job security for both parents, but it encourages social change within families and society to shift the sole care responsibility away from women.

When considering how intertwined our treatment of women in the workforce is with our societal expectations of women as carers both in paid and unpaid work, perhaps it is this kind of framework that we should be discussing moving forward. First and foremost, however, it is about continuing to discuss the issues that sustain inequality for women in the workforce.

If we can begin to talk more about this with our friends and families, then we can talk about it with our employers, our unions and our policymakers. So let’s use this 16 Days to amplify the discussion, and pave the way for future women in our workforce. 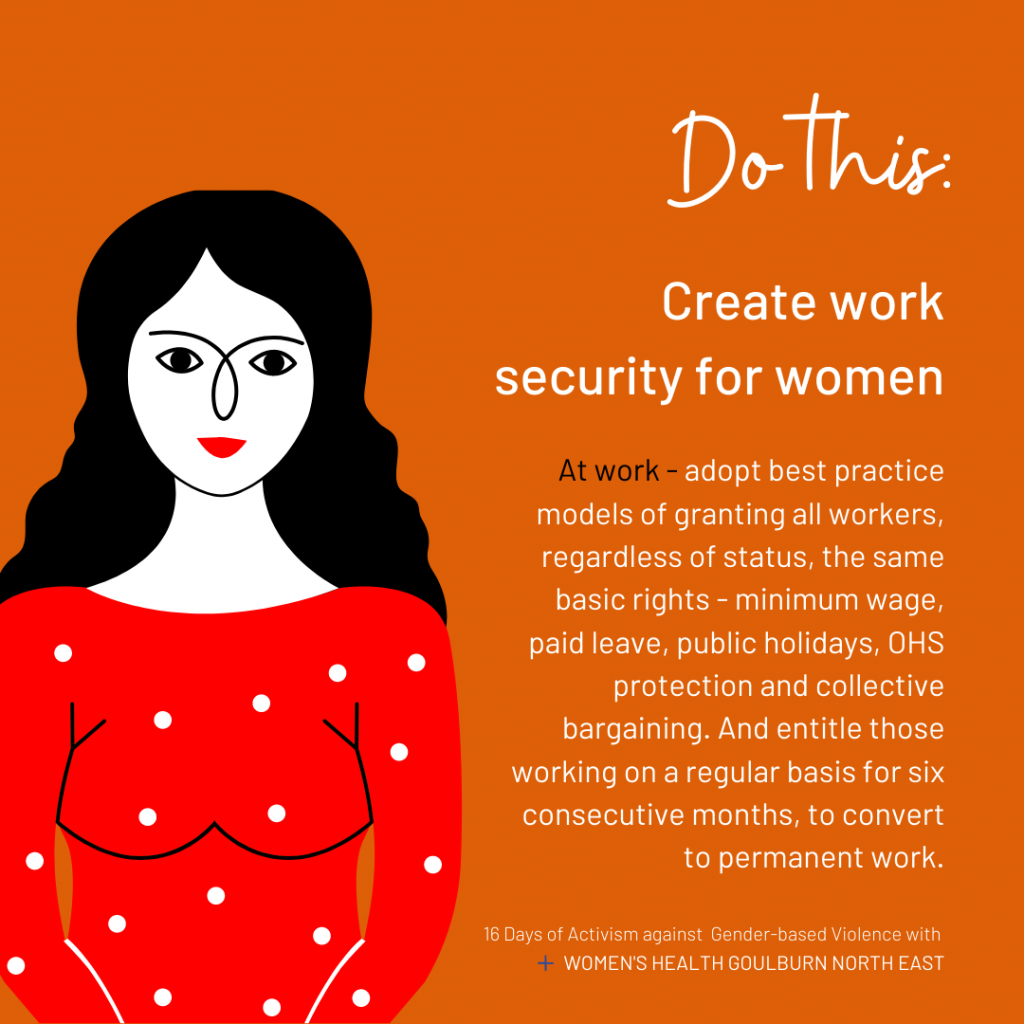