Daily are we confronted with evidence that the COVID19 pandemic disproportionately impacts women. This is a reality determined by gender inequality in our communities.

Gender inequality has influenced presumptions about women’s health needs – so gender-disaggregated data about the pandemic has not been prioritised. It has meant more women – working in traditionally female-dominated health and ‘caring’ industries – have wound up on the frontline of services dealing with the pandemic.

It has seen a disproportionate number of women impacted by industry shutdowns and job losses, as women are more likely to work in insecure casual positions, or in hospitality or retail. And it has meant that women – whether they retain their jobs or not – are now taking on extra domestic and caring duties, because traditional gendered divisions of labour continue to influence how households function.

Gender inequality is responsible for women’s lack of superannuation, disadvantaging them in light of the government’s relaxation of rules around early access to super as a “cushion” to the economic blow dealt by the virus. Gender inequality determines which households have the financial ‘buffer’ necessary to allow them to stock up on household goods.

And, most horrifically, gender inequality is what lies beneath violence against women, and ultimately determines whether women feel safe in their own homes during this period of self-isolation.

However government investment in strategies to help women has lagged behind other economic stimulus and support.

Gender Equity Victoria and its member organisations – women’s health groups from around the state – have collated a series of factsheets that explore the impact of COVID-19 on women and gender-diverse people in Victoria.

What the facts make clear is that as we move towards recovery from the pandemic, gender responsive decision-making and solutions are more important than ever. It’s the only way to achieve gender equality and community resilience. 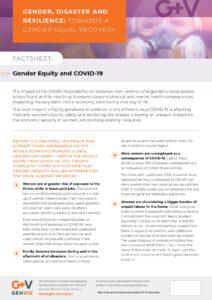 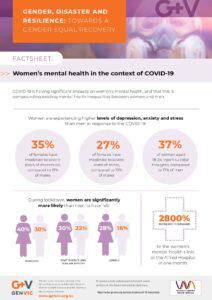 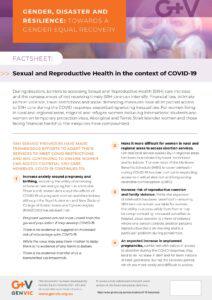 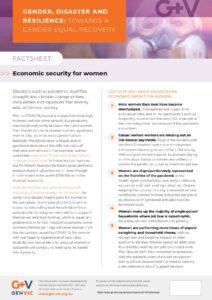 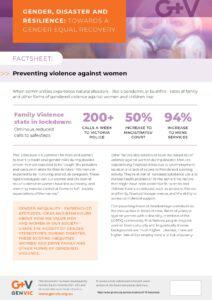