Women’s Health Services across Victoria – and the country – have been saying it for months. The COVID-19 pandemic has had a devastating impact on women, as frontline workers in the foundational economy, unpaid carers for families, employees in vulnerable and unstable jobs. The crisis has rolled back decades of gains in gender equality, amplifying existing structural injustices.

Only a federal budget, considered and applied with a gendered lens, could have ensured that the economic and social fallout of COVID-19 resulted in a better, more equitable economy that supported and empowered women and responded to their diverse needs.

Last night’s federal budget was not that budget.

Just one third of one percent of the budget – $240 million over five years – was directed towards “women’s economic security”, most of this investment in the form of increasing jobs for women in male-dominated industries like construction and initiatives aimed at tackling sexual harassment in the workplace.

There was no mention of measures to address the significant job losses in industries dominated by women. There was no new spending on initiatives to address the structural inequality that has resulted in the gaping gender pay gap we now see. There was no announcement about how women who have dipped into their superannuation to survive the pandemic would be supported. No financial support of the over-burdened domestic and family violence services. And despite the evidence that investment in childcare would support women to return to work, and families to share the care burden, there was no increase in rebates, capping of prices, or tax deductability for childcare expenses.

Indeed it has been widely reported that this budget has failed women – middle aged and older women in particular.

We have been saying it for months. And though the federal budget may have already been delivered, but we will continue to say it – this country needs gender responsive budgeting. It needs equal representation of women at the budget decision-making table. And its needs to listen to the voices of women, and the voices of those advocating for women, to ensure that the needs and aspirations of 51 percent of the Australian population are taken into account. 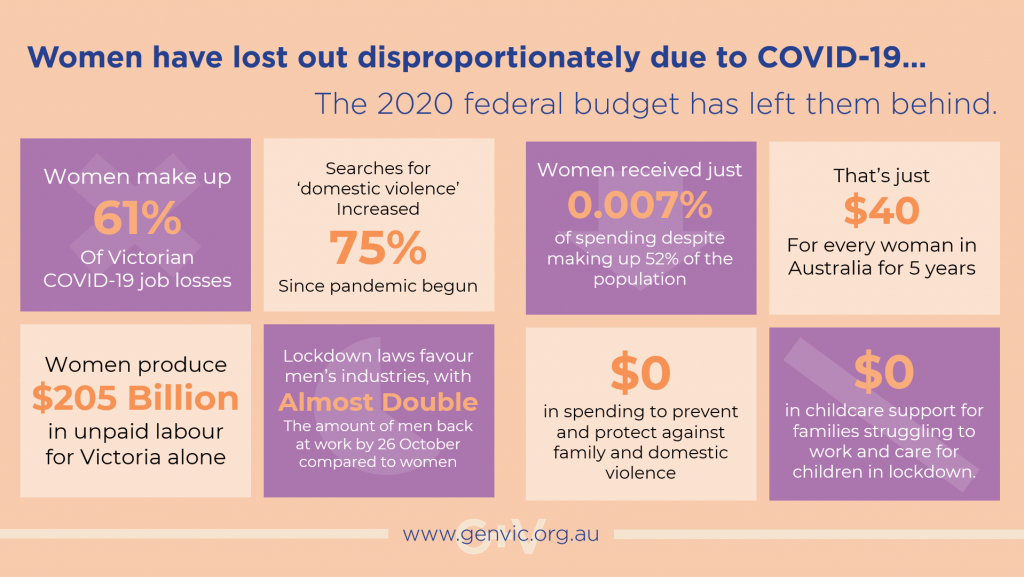