We marched together, now what? 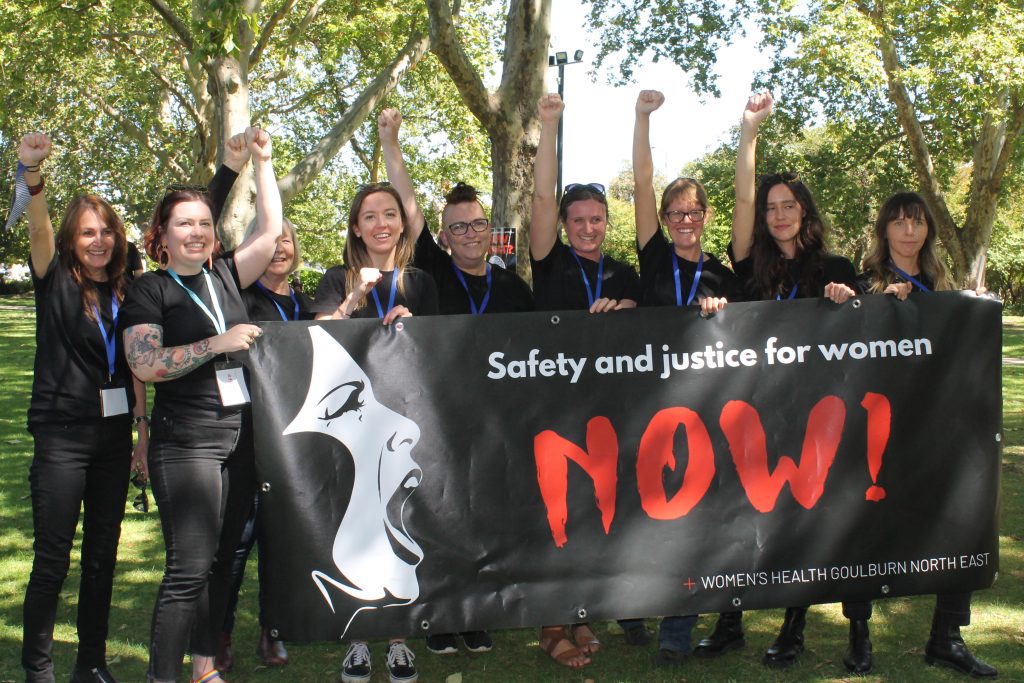 Yesterday’s Women’s March for Justice in Wangaratta was as empowering as it was emotional – filled with love and rage, in equal amounts. In all honesty, it has taken us a little while to gather our thoughts to be able to write about it today.

We can’t emphasise how heartened we felt to see so many people in the gardens, women and men and gender-diverse people of all life stages, coming together to cry out as one – ENOUGH IS ENOUGH. 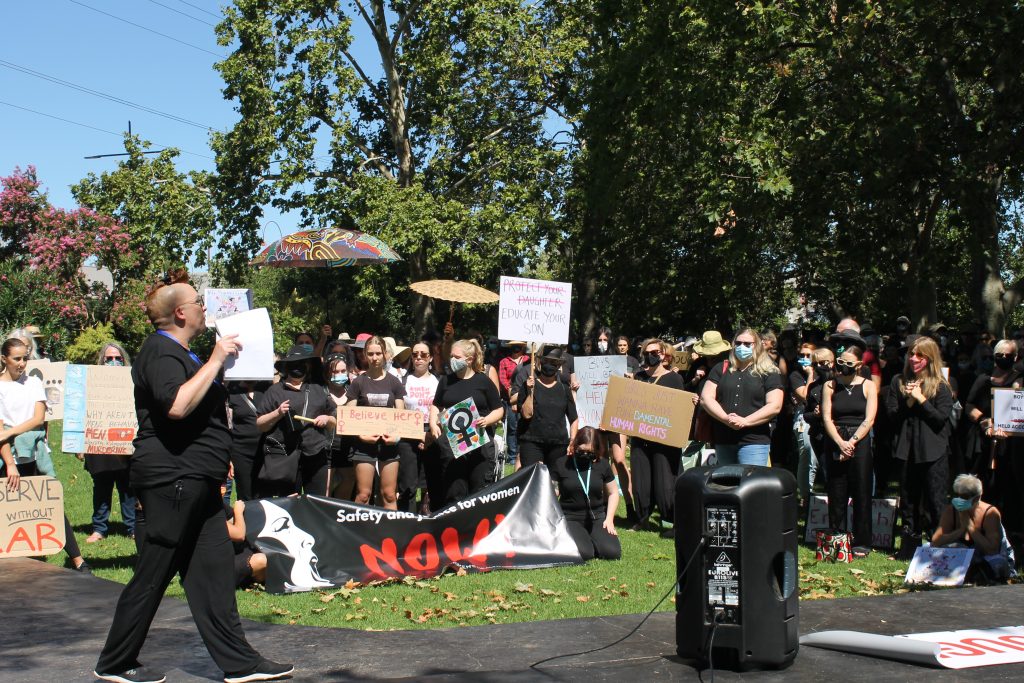 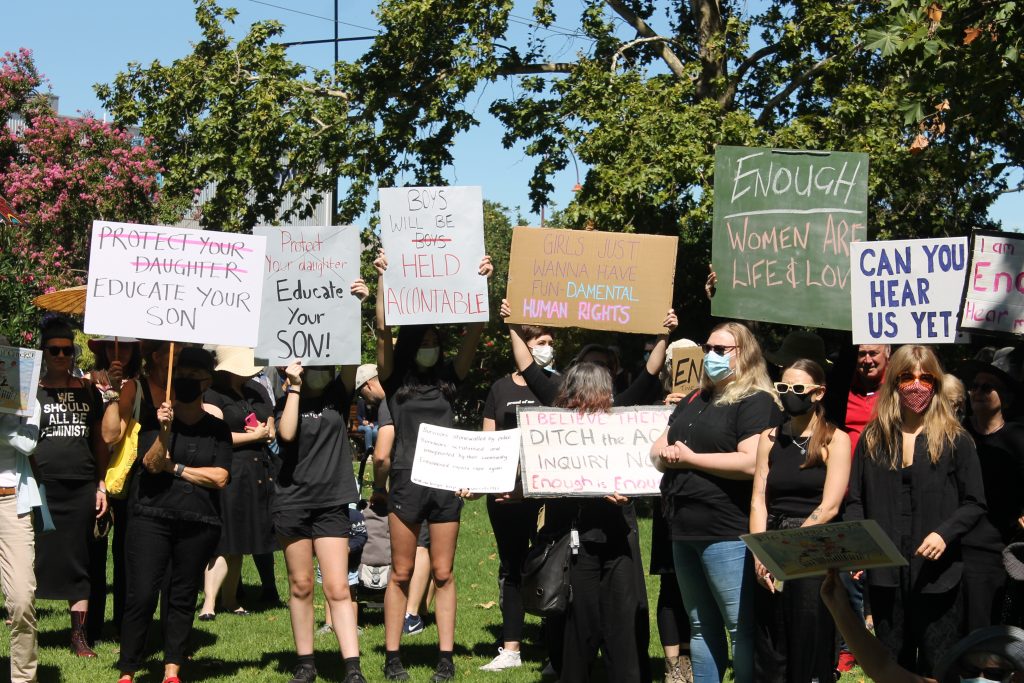 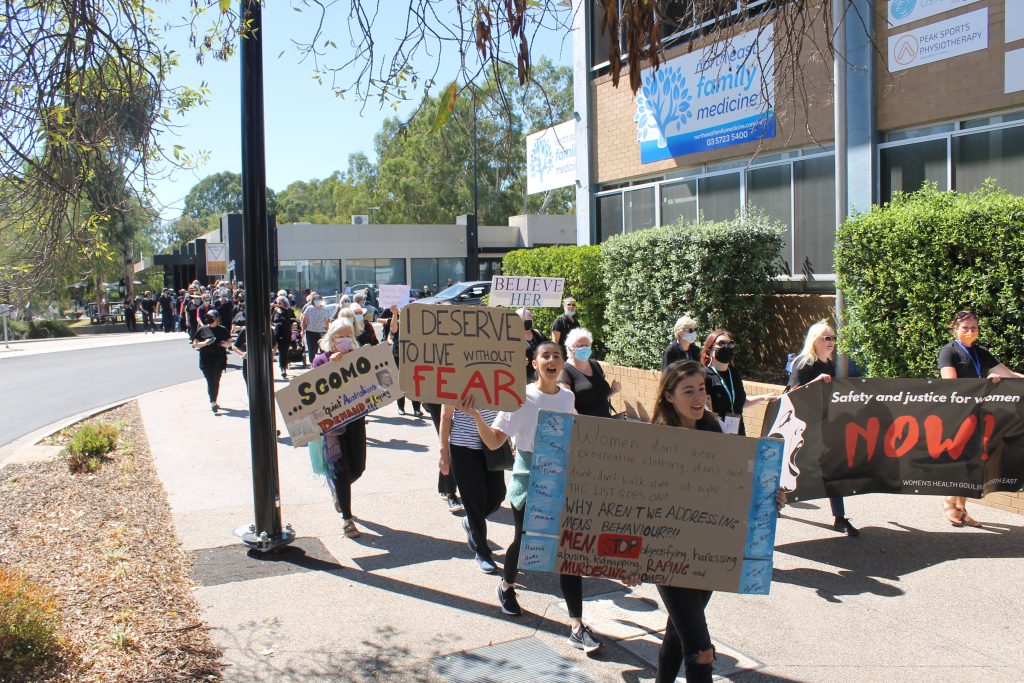 Indeed, the words of our speaker, Dr Kate Auty, powerfully summed up the feelings of the day, and the weeks preceding it –

“We’ve had a bloody gutful.”

A gutful of the sexism, of the face-saving and the toxic power dynamics displayed in our Federal Parliament. A gutful of that shameful statistic that our society seems to now take for granted, of one woman being killed a week by a male intimate partner. A gutful of workplaces – like our Federal Parliament, the highest profile workplace in the land – that pay lip service to gender equity while excusing, justifying and covering up allegations of violence against women and belittling and degrading the women who speak up about it.
Since walking the streets of Wangaratta with our friends and allies of gender equality and safety for women yesterday, we’ve been asked so many times, “What happens now?”
If we could snap our fingers and create a community, a broader Australian culture, that was inclusive, just, equal, fair, respectful, healthy, we would do it. But this is a process of changing hearts and minds – yours and mine, the hearts and minds of our politicians, our company directors, our kids, our neighbours, our sporting mates, our media outlets, our community committee leaders…

What happens now determines how fast that process unfolds. This is the bit you have control over. As Dr Auty said yesterday, “We need to go back to our schools, our workplaces, our boards and say DO SOMETHING ABOUT THIS.”

Good people, today is a day to rest after an emotionally taxing day yesterday. But tomorrow, once you’ve mustered your strength, we want you to reach out to your sphere of influence and DO SOMETHING ABOUT THIS.
Be bold and unapologetic about calling out sexism – know that you have a community of supporters behind you. Know that this one gesture can nip in the bud the culture that drives violence against women.
Back up other people who call out sexism, disrespectful behaviour and attitudes – the more we support each other, the stronger the culture we are striving to create becomes.
Check your own behaviour, your own thinking. We’re all swimming in a cultural soup that we’ve unconsciously absorbed, and that we unconsciously, inadvertently perpetuate on a daily basis, whenever we treat girls differently from boys, whenever we excuse bad behaviour with words like, “Boys will be boys,” whenever we expect ourselves and others to pin our identities to binary and often outdated notions of masculinity or femininity. This big cultural shift starts inside of ourselves and it can reveal uncomfortable truths. But this is the guts of the work involved in changing a culture.
Demand that your workplace, your community group, your sporting team, your school, create a gender equality policy so that women are safe in every space of our community, their voices not just heard but LISTENED to, and their experiences valued and reflected in the workings of public life.
As hackneyed as it sounds, we urge you to pen a letter to your local MP and demand action – we’ve created resources to help you do this here.
Men, stand up for women in the face of sexist jokes amongst mates, even when it feels uncomfortable for you. This is what being a good ally looks and feels like. Create and hold space for women to speak, listen to them, believe them, empathise, understand. Commit to effecting the change that we need in your own spheres of influence.
Women, stand up for other women. If you are in a position of power, lift up the women around you. Support them, encourage them to raise their voices. Listen to them, believe them, empathise, understand.

Most of all, be gentle with each other and yourselves.

There were a lot of people at yesterday’s march who said they’d marched with a similar placard, and yelling a similar rally cry, in 1975. And again in 1999. And again…and again…and again… It is a tiring fight, one that triggers trauma and sadness for so many people. Know that if you need to take a rest, there are hundreds, thousands of others in our community who will bear the burden and continue the struggle for you.
Thank you again to everyone who came along – in body or in spirit – yesterday.

We won’t stop until it’s done.